February 23, 2021 LOS ANGELES (AP) — Golf star Tiger Woods suffered leg injuries Tuesday in a vehicle rollover in suburban Los Angeles and was undergoing surgery, authorities and his manager said. Woods was alone in the vehicle and had to be extricated from it, the Los Angeles County Sheriff’s Department said in a statement. No other cars were involved in the wreck that injured the golfer.

An ambulance took Woods to a hospital in serious condition, authorities said. 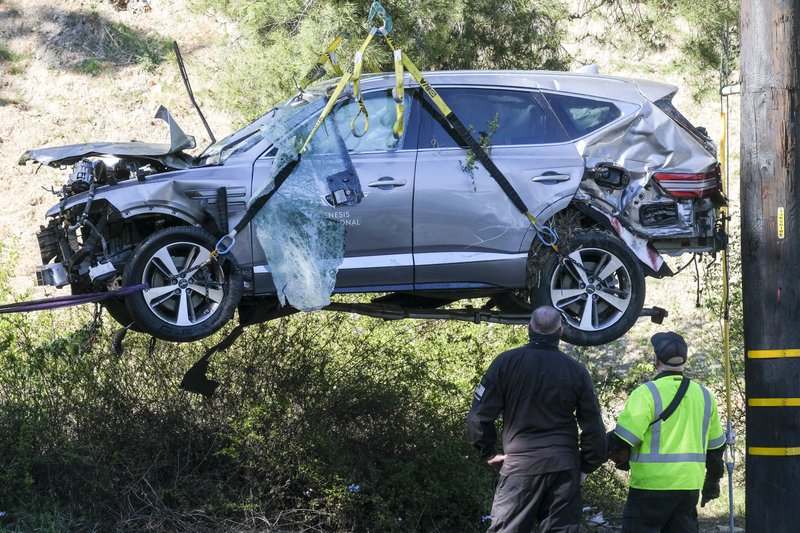 “Tiger Woods was in a single-car accident this morning in California where he suffered multiple leg injuries,” said his manager, Mark Steinberg. “He is currently in surgery and we thank you for your privacy and support.”

A KABC-TV helicopter over the wreck showed a car on its side, with its front end heavily damaged just off the side of a road near a hillside. The airbags appeared to be deployed.

There was a second crash when a vehicle that had apparently stopped to help Woods got hit, said Christopher Thomas, a spokesman for the Los Angeles County Fire Department. That wreck was very minor, and no one was hurt.

Woods was in Los Angeles over the weekend as the tournament host of the Genesis Invitational at Riviera, where he presented the trophy. He was to spend Monday and Tuesday filming with Discovery-owned GOLFTV, with whom he has an endorsement contract. A tweet Monday showed him in a cart smiling with comedian David Spade.

According to Golf Digest, also owned by Discovery, the TV shoot was on-course lessons to celebrities, such as Spade and Dwyane Wade. He did not play.

The 15-time major champion last played Dec. 20 in the PNC Championship with his 11-year-old son, Charlie. He had a fifth surgery on his back, a microdiscectomy, two days before Christmas and gave no indication when he would return. The Masters is April 8-11 and when asked if he would be there during the CBS telecast, Woods replied, “God, I hope so.”

This is the third time Woods has been involved in a car investigation. The most notorious was the early morning after Thanksgiving in 2009, when his SUV ran over a fire hydrant and hit a tree. That was the start of shocking revelations that he had been cheating on his wife with multiple women. Woods lost major corporate sponsorship, went to a rehabilitation clinic in Mississippi and did not return to golf for five months.

In May 2017, Florida police found him asleep behind the wheel of a car parked awkwardly on the side of the road. He was arrested on a DUI charge and said later he had an unexpected reaction to prescription medicine for his back pain. Woods later pleaded guilty to reckless driving and checked into a clinic to get help with prescription medication and a sleep disorder.

September 7, 2021  NEW YORK (AP) — Actor Michael K. Williams, who as the rogue robber of drug dealers Omar Little on “The Wire” created one of the most beloved and enduring characters in a prime era of television, died Monday. Williams was found dead Monday afternoon by family members in his Brooklyn penthouse apartment, New York City police said. He was 54. His death was being investigated as a possible drug overdose, the NYPD said. The medical examiner was investigating the cause of death. Little, a “stick-up boy” based on real figures from Baltimore, was probably the most popular character among the devoted fans of “The Wire,” the HBO show that ran from 2002 to 2008 and is re-watched constantly in streaming.

September 8, 2021 LOS ANGELES (AP) — Britney Spears’ father filed Tuesday to end the court conservatorship that has controlled the singer’s life and money for 13 years. James Spears filed his petition to terminate the conservatorship in Los Angeles Superior Court. “As Mr. Spears has said, again and again, all he wants is what is best for his daughter,” the document says. “If Ms. Spears wants to terminate the conservatorship and believes that she can handle her own life, Mr. Spears believes that she should get that chance.” Judge Brenda Penny, who oversees the case, will need to approve the move. Britney Spears attorney Matthew Rosengart said in an email the filing “represents another legal victory for Britney Spears — a massive one — as well as vindication for Ms. Spears.”

September 8, 2021  NEW YORK (AP) — With Katie Holmes and Lil’ Kim on his front row and singer Marina on the mic high above his runway, Christian Siriano helped kicked off New York Fashion Week’s first big pandemic round of in-person shows Tuesday with a flurry of neon and lace-inspired in part by all the Italian women in his life. From ornate Gotham Hall, beneath a stained-glass skylight 70 feet up, Siriano’s commitment to size inclusivity was never stronger as he opened and closed the show with plus-size breakout model Precious Lee. She first walked in a stunning yellow trouser suit with wide loose pants and an asymmetrical jacket, a matching crossover bralette underneath.

September 7, 2021  VENICE, Italy (AP) — Paul Schrader knows he has a limited number of films left, so whatever he does from here on out is going to be for himself. At 75 years old, the writer of “Taxi Driver” and “Raging Bull” and director of “American Gigolo” and “Mishima” was even somewhat prepared to call it a day after his 2018 film “First Reformed,” for which he got his first Oscar nomination. He didn’t want to. He just knew it might be the reality. “I thought I would go back to this character again for about the fifth time,” Schrader said in a recent interview. By “this character” he means “the man in the room.” It’s Travis Bickle. It’s John LeTour. It’s Julian Kay. And it’s a formula he’s been working with for 45 years.

September 8, 2021  -Stocks were mostly lower in Asia on Wednesday after a lackluster session on Wall Street, where weak jobs data and pandemic concerns weighed on sentiment. Shares rose in Tokyo after economic growth for the April-June quarter was revised upward to an annualized 1.9% from an earlier estimate of 1.3%. “Any feel-good factor was ignored, though, given the climb was less than half of the 4.20% fall in Q1,” Jeffrey Halley of Oanda said in a commentary. “Japan will be lucky to break even this year as the current Covid-19 wave will almost certainly have weighed on domestic consumption,” he said.

September 8, 2021 NEW YORK (AP) — There will be something missing at two Whole Foods stores opening next year: the rows of cashiers. Amazon, which owns the grocery chain, said Wednesday that it will bring its cashier-less technology to two Whole Foods stores for the first time, letting shoppers grab what they need and leave without having to open their wallets. Cameras and sensors track what’s taken off shelves. Items are charged to an Amazon account after customers leave the store with them. But there will be an option for those who want to shop the old-fashioned way: Self-checkout lanes will be available that take cash, gift cards and other types of payment. Amazon first unveiled the cashier-less technology in 2018 at an Amazon Go convenience store and has expanded it to larger Amazon supermarkets. But it will be the first time it has appeared at Whole Foods, a chain of more than 500 grocery stores Amazon bought four years ago.

September 8, 2021  BEIJING (AP) — An avalanche of changes launched by China’s ruling Communist Party has jolted everyone from tech billionaires to school kids. Behind them: President Xi Jinping’s vision of making a more powerful, prosperous country by reviving revolutionary ideals, with more economic equality and tighter party control over society and entrepreneurs. Since taking power in 2012, Xi has called for the party to return to its “original mission” as China’s economic, social and cultural leader and carry out the “ rejuvenation of the great Chinese nation.” The party has spent the decade since then silencing dissent and tightening political control. Now, after 40 years of growth that transformed China into the world’s factory but left a gulf between a wealthy elite and the poor majority, the party is promising to spread prosperity more evenly and is pressing private companies to pay for social welfare and back Beijing’s ambition to become a global technology competitor.

“Representation Is the Bare Minimum”: Modeling’s Biggest Stars Speak Out